ATG Book of the Week: The Entrepreneurial Librarian: Essays on the Infusion of Private-Business Dynamism into Professional Service

ATG Book of the Week: The Entrepreneurial Librarian: Essays on the Infusion of Private-Business Dynamism into Professional Service 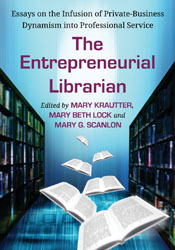 The Entrepreneurial Librarian: Essays on the Infusion of Private-Business Dynamism into Professional Service

Three academic librarians with different perspectives have pool their talents in editing this anthology of essays that “illustrates how librarians are infusing entrepreneurial principles in a variety of arenas, including public, private, academic, and special libraries. It chronicles how entrepreneurial librarians are flourishing in the digital age, advocating social change, responding to patron demands, designing new services, and developing exciting fundraising programs. Applying new business models to traditional services, they eagerly embrace entrepreneurship in response to patrons’ demands, funding declines, changing resource formats, and other challenges. By documenting the current state of entrepreneurship in libraries, this volume upends the public image of librarians as ill-suited to risky or creative ventures and places them instead on the cutting edge of innovations in the field.”