“EBSCO has been named the sole library distributor of the AP Images, the commercial photo unit of AP…  The database called “AP Images Collection is a primary source database with millions of images from 1826 to present and more than 3,500 additional photographs are added daily. The collection also includes 36,400 audio sound bytes dating from the 1920s and more than 2,900 multimedia interactives… In addition, AP Images Collection provides 2.7 million Associated Press news stories from 1997 to present, and a professionally produced collection of more than 340,000 maps, graphs, charts, logos, flags and illustrations…”

According to the Inside Higher Ed website, the Associated Press reports “the California Senate on Wednesday passed two bills that would require the state to create free, online textbooks through open source materials for the top 50 courses taught in the state…”

The article in the Associated Press says “the bills sought by Senate President Pro Tem Darrell Steinberg would require the state to put out bids to create the open-source material for the top 50 college classes. It would be free on the Internet and allow students to buy printed copies at a low cost.”

e-Duke Books Scholarly Collection -The collection includes at least 100 new electronic books published by Duke University Press in 2013. Customers also receive access to over 1,400 backlist titles during the years in which they purchase the collection…” 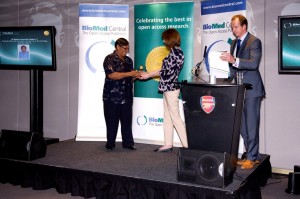 “Open access publisher BioMed Central presented the Open Access Advocate of the Year award at their recent 6th Annual Research Awards ceremony held at Emirates Stadium, UK on Thursday 17th May. Dr Helena Asamoah-Hassan, University Librarian of the Kwame University of Science and Technology (KNUST), Kumasi, Ghana and a Fellow of the Ghana Library Association was only the second individual winner of this prestigious award…”