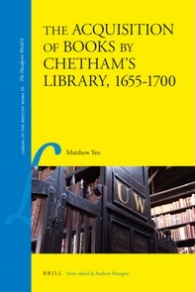 Series Name: Library of the Written Word – The Handpress World

“Chetham’s Library, Manchester, was founded in 1655 by the bequest of the Manchester merchant, Humphrey Chetham (1580-1653). Drawing on recent debates about the methods of book history, this book is a detailed study of the way in which an early modern provincial library was created, stocked with books and administered. Using extensive archival research into the Library’s acquisitions and the trade in books and ideas in the later seventeenth century, Yeo examines the motivations behind the Library’s foundation, the beliefs of those responsible for the selection of books and the Library’s relationship with the London bookseller Robert Littlebury. The result is a refreshing reinterpretation of provincial intellectual culture and the workings of the early modern trade in books and ideas.”

“Reading this book is not just to learn about Chetham’s Library, but also to be called to think about what is important about historic books and libraries, and what we can learn from them by looking from many angles. In summary, therefore: this is an excellent book whose contribution to scholarship goes far beyond the narrative account that its title might be thought to imply. Certainly, it should be of interest to early modernists of many persuasions and should be on the shelves of any library which supports serious study in such fields.”
David Pearson, City of London. In: Library & Information History, Vol. 28, No. 1 (March 2012), pp. 62-63.