ATG Book of the Week: College: What it Was, Is, and Should Be

ATG Book of the Week: College: What it Was, Is, and Should Be 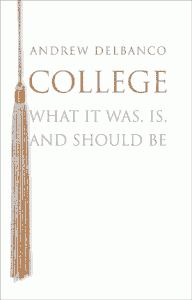 Title: College: What it Was, Is, and Should Be

“As the commercialization of American higher education accelerates, more and more students are coming to college with the narrow aim of obtaining a preprofessional credential. The traditional four-year college experience–an exploratory time for students to discover their passions and test ideas and values with the help of teachers and peers–is in danger of becoming a thing of the past.

In College, prominent cultural critic Andrew Delbanco offers a trenchant defense of such an education, and warns that it is becoming a privilege reserved for the relatively rich. In arguing for what a true college education should be, he demonstrates why making it available to as many young people as possible remains central to America’s democratic promise.

In a brisk and vivid historical narrative, Delbanco explains how the idea of college arose in the colonial period from the Puritan idea of the gathered church, how it struggled to survive in the nineteenth century in the shadow of the new research universities, and how, in the twentieth century, it slowly opened its doors to women, minorities, and students from low-income families. He describes the unique strengths of America’s colleges in our era of globalization and, while recognizing the growing centrality of science, technology, and vocational subjects in the curriculum, he mounts a vigorous defense of a broadly humanistic education for all. Acknowledging the serious financial, intellectual, and ethical challenges that all colleges face today, Delbanco considers what is at stake in the urgent effort to protect these venerable institutions for future generations.”

“Has the democratic ideal of a classical education, open to rich and poor alike, become a thing of the past? That’s the scenario proposed by esteemed literary scholar Delbanco in this engaging assessment of how American higher education has lost its way. . . . He makes a strong case that the purely materialist approach to education assures that the disparity between rich and poor students only widens, with ‘merit-based’ financial aid and scholarships all going disproportionately to students from families with money. . . . This is an impassioned call for a corrupt system to heal itself.”–Kirkus Reviews

“Delbanco explores American higher education in a manner befitting a scholar of Melville and the Puritans, with a humanist’s belief in lessons from history and in asking what the right thing is to do. . . . College has always been a microcosm of society, so a book about it is also about how we’re doing as a country.”–Clare Malone, American Prospect

“A thoughtful and insightful look at American college’s exceptionalism and pitfalls. . . . Whether you’re in college, thinking about college or just paying for it, it’s a good read to help better understand one of America’s oldest and finest institutions. And if we want it to stay that way, we all better get schooled about it.”–Kacie Flynn, Vox Magazine, Missourian

“Recommended for academic and general audiences as a thoughtful, literate, and gracefully written reminder of what higher education needs to be.”–Elizabeth R. Hayford, Library Journal