ATG Book of the Week: The Forgotten Founding Father: Noah Webster's Obsession and the Creation of an American Culture

ATG Book of the Week: The Forgotten Founding Father: Noah Webster's Obsession and the Creation of an American Culture 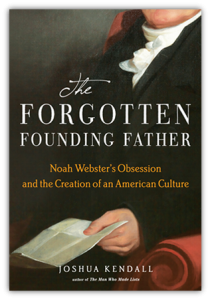 Given Noah Webster’s standing as a “path-breaking lexicographer” and creator of perhaps America’s first great reference work, Joshua Kendall’s fascinating new biography deserves a wide readership.  As you might expect, Webster is portrayed as playing an essential role in the development of the American language.  Not only did he compile the landmark American Dictionary of the English Language, he also published a “legendary spelling book, which would teach five generations of Americans how to read.”  However, Joshua Kendall gives us much more than that.  His Webster is an obsessive-compulsive who “housed a host of contradictory identities: revolutionary, reactionary, fighter, peacemaker, intellectual, commonsense philosopher, ladies’ man, prig, slick networker and loner.”