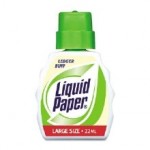 ©2007 SANFORD. A DIVISION OF NEWELL RUBBERMAID

This is a charming little book and a quick read about men and women who made inventions that change our lives. One of my favorites is Bette Nesmith Graham who wasn’t the best typist but invented of all things Liquid Paper (remember that?) which the Gillette Corporation offered her $47.5 million for in a lump sum payment plus royalties on every bottle sold through the year 2000. And, guess what, when Bette died in 1980 she left some of her considerable fortune to her son Michael, a member of the group the Monkees. And Michael invested some money in  a video music production studio. What you don’t learn when you read! And, do you know where your bottle of Liquid Paper is today?