Paul Needham is at the Cranfield University Library and is currently the Project Manager of the PIRUS2 project.

One of the more significant developments since scholarly articles have been published online has been the growing role of institutional and subject repositories as hosts for these articles. The publishers of journals, though still the most important hosts, no longer have a monopoly of the distribution of these articles that they enjoyed in the print world. This trend has been given considerable further momentum by the Open Access movement, which encourages the free availability of the outputs of scholarly research, especially where that research has been publicly funded.

A reader searching online for a particular article may now find it in a number of different locations:

It is not the purpose of this article to argue the pros and cons of this highly distributed system for the publication of scholarly articles, still less to present the case for or against Open Access publishing. Rather, we accept that these trends are now well established and that any system for recording and reporting online usage of articles must take them into account. This makes the task of counting usage at a global level rather challenging. For a start, it will no longer suffice to record and report usage at the journal level: the journal as a package of articles is used by publishers, but not by repositories, which are organised on the basis of individual items. Then we have to consider the status of different versions of articles and which versions should be counted. Clearly, the accepted version of an article, or the published version of record has higher status than the author’s initial draft, but does this mean that usage of the latter should not be counted at all, or does it mean that such usage should be weighted differently? These and other issues become highly pertinent in this increasingly heterogeneous publishing environment, and the aim of the PIRUS (Publisher and Institutional Repository Usage Statistics) project is to address them.

COUNTER as a Basis for Individual Article Usage Statistics

Aims and Objectives of PIRUS2

The aim of PIRUS2 is to specify COUNTER– consistent standards and protocols (as well as an infrastructure and an economic model) for the recording, reporting, and consolidation of online usage of individual articles hosted by repositories, publishers, and other entities.

In order to achieve this overall aim, the project will seek to meet the following main objectives:

The work of PIRUS2 will ensure that usage data are available for journal articles wherever held (publisher sites, repositories, aggregators), whilst going further than Web analytics software and more able to meaningfully address the consistency of the usage data and the resultant quality of the reports.

Repositories will benefit from a technical point of view as PIRUS2 will provide them with access to new functionality to produce standardised usage reports from their data.

Digital repositories systems will be more integral to research and closely aligned to research workflows and requirements, as the project addresses production of authoritative usage data.

The authoritative status of PIRUS2 usage statistics will serve to enhance trust across repositories; furthermore, the data will provide a firm evidence base for repositories to take firm steps to defining clear policies to support their goals.

Which Article Versions to Count?

The original PIRUS project team proposed that usage should be counted only for accepted manuscripts and subsequent versions, as only at the point of acceptance for publication in a journal does an article become part of the formal record of scholarship. It was also agreed by the project team that PIRUS should be consistent with the terminology used by the JISC VERSIONS project (http://www.lse.ac.uk/library/versions/VERSIONS_Toolkit_v1_final.pdf), which defines five main stages in the life of an article, as well as the recently agreed NISO/ALPSP recommendations on article versions (http://www.niso.org/publications/rp/), which defines seven stages of a journal article.

It was agreed, however, that for the purposes of PIRUS it is not necessary to record and report separately the usage of each of stages in either the NISO/ALPSP definition or the JISC definition. For usage purposes it would be desirable to distinguish between usage of the accepted manuscript/proof and usage of the version of record. While it is desirable that usage of these two broad categories of versions (Table 1, Column 3, Versions A and B) should be separately recorded, consolidated, and reported for each article, this is unlikely to be practical for most publishers and repositories in the near future. Bundled A and B usage reports will, however, be acceptable in the short term.

An outstanding issue to be resolved here is which metadata element should be used to expose this information — there is no standard as yet.

Again, an outstanding issue to be resolved here is which metadata element should be used to expose this information — there is no standard as yet.

Therefore, in order to identify which items are articles and how different versions of articles are identified, it is necessary to take a closer look at metadata usage within repositories.

Most of the repository softwares support qualified Dublin Core ( q D C ) or hold meta-data that corresponds to and can be mapped quite easily to qDC.

Metadata elements typically used when cataloguing articles in repositories include:

All repositories include Title, Author and Resource type metadata. Research carried out for PIRUS confirms that many repositories add citations identifying the published versions of articles in their records.

More than a purely Technical Challenge

The original PIRUS project (http://www.jisc.ac.uk/whatwedo/programmes/pals3/pirus.aspx), demonstrated that it is technically feasible to create, record, and consolidate usage statistics for individual articles using data from repositories and publishers, despite the diversity of organizational and technical environments in which they operate. If this is to be translated into a new, implementable COUNTER standard and protocol, further research and development will be required, specifically in the following areas:

Standards and Protocols A new COUNTER report, Article Report 1: Number of Successful Full-Test Article Requests by Month and DOI (AR1), has been developed. This provides a standard, COUNTER-compliant format for publishers and repositories for the submission of usage statistics at the individual article level. A specification for Article Report 1 is available on the PIRUS2 Website in XML and MS-Excel formats at http://www.cranfieldlibrary.cranfield.ac.uk/pirus2/tiki-index.php?page=Project+Plan+and+Progress. 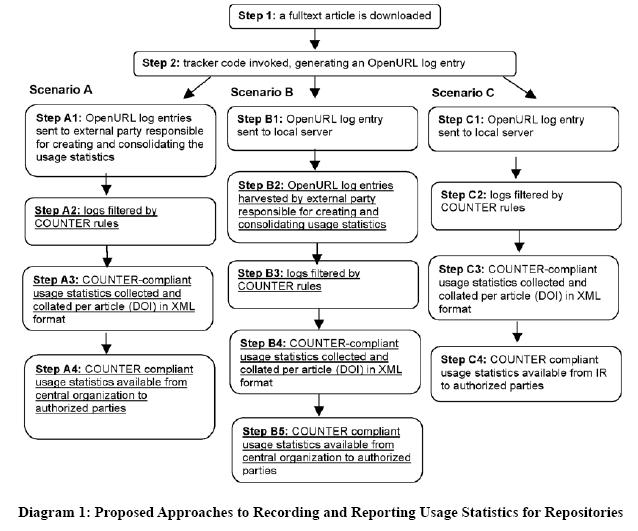 As part of the PIRUS2 project plugins have been developed for three of the major repository software applications (DSpace, Eprints, and Fedora), and these are in the process of being tested in a range of repositories using these applications.

Usage data must be filtered according to COUNTER rules to eliminate Robots and Double clicks and processed into monthly statistics.

At this stage, the PIRUS2 team consensus is that it is not yet appropriate for repositories to attempt to supply COUNTER-compliant AR1 reports. The AR1 standard is still being developed. Technically, it is challenging to incorporate SUSHI into the wide range of repository softwares, and there are issues, even among publishers, about the size of SUSHI reports, lack of compression, etc. Businessmodel- wise, it would incur costs/time/effort for each and every IR to undergo regular COUNTER audit for compliance.

Ultimately, publishers will supply AR1 usage statistics reports via SUSHI. However, the AR1 Report is not yet an agreed COUNTER standard, and SUSHI implementations are technically demanding both on the server and client sides, so — for the purposes of the tests — PIRUS2 has agreed to accept data in MS Excel format. Test usage data is now being obtained from the following COUNTER-compliant publishers: ACS Publications, Emerald, IOP Publishing, Nature Publishing Group, NEJM, OUP, Springer, and Wiley.

So far test usage data for 450,000 individual articles from 5,500 journals has been collected and is being processed.

A skeletal user interface is in place; its development and testing is ongoing.

We face two main challenges in attempting to create a Central Clearing House (CCH) to consolidate individual article usage statistics at a global level. The first is primarily technical. Not only will the CCH have to receive and manage usage data from a range of publishers, but is also has to deal with the diversity of repository softwares and implementations that are in use.

The second challenge is in persuading repositories, publishers, and other organizations to participate in and support such a CCH service. Meeting this challenge will require us to demonstrate not only the benefits of providing global usage statistics at the individual article level but also that this can be done cost-effectively and reliably.

Functions to be fulfilled by Central Clearing House

It has been agreed that the CCH will have to perform the following basic functions:

Organizationally, the favoured option is to go for a global organization, as this will make it easier to implement and adhere to standards, and we are now exploring this. International standards organizations already exist in STM publishing and have shown that it is possible to collect and collect large volumes of publication- related data on a global basis. It may well be that no single organization has, or wishes to develop, all the capabilities required, but one can imagine a partnership between organizations with complementary capabilities to create a global service.

Work on PIRUS2 commenced in October 2009 and the project is scheduled for completion in December 2010. Further information on PIRUS2 may be found on the project Website at http://www.cranfieldlibrary.cranfield.ac.uk/pirus2.