Against the Grain, Full Text Articles

Johan Bollen is an Associate Professor at the Indiana University School of Informatics and Computing and is also the Principal Investigator of the MESUR project. Dr. Bollen’s current research interests include usage data mining, complex networks, computational sociometrics, informetrics, and digital libraries.

Metrics of scientific impact are frequently defined as a function of the number of citations received by a particular scholarly publication.

The IF is, however, not the only conceivable citation-based impact metric. Other citationbased metrics have been introduced in the past five years to indicate various facets of impact such as author-impact, cf. h-index (Hirsch, 2005), journal influence, cf. PageRank (Bollen, 2006) and Eigenfactor (Bergstrom, 2007), and various other citation-derived indicators, e.g., Leydesdorff (2007). Many of these indicators are now commonly used to assess the impact of individual scholars and their publications.

In spite of its general acceptance, scholarly assessment from citation-data is, however, subject to a number of limitations that originate from the inherent properties of citation data. First, it can take anywhere from six months to several years to publish an article and for it to become “citable.” Citation data is therefore subject to extensive publication delays and may for that reason be a delayed indicator of current scholarly activity. Second, citation data by its very nature is focused mostly on authors of journal publications. As a result, citation data does not fully represent the activities of communities that either do not publish and/or publish in different formats and venues, e.g., social sciences and humanities.

Citations have their origin in the world of print but many if not most scholarly publications are now published and accessed online. As users access the scholarly literature via online services, their activities are generally tracked and recorded in server log data. These records, referred to as usage data, provide detailed information on how scholarly resources affect the scholarly community through their usage.

Usage data may confer several significant advantages over citation data as a foundation for scholarly assessment. First, usage data can be recorded immediately after online publication and during all stages of scholarly activity. It thus provides a rapid, yet comprehensive indication of scholarly activity. Second, usage data can be recorded for a wide variety of participants in the scholarly communication process, not merely those who publish journal articles, and can in principle be recorded for any online resource including books, data files, software, images, and sound files. Third, usage data is recorded at a very large scale that may exceed the magnitude of all existing citations by several orders of magnitude. Its sheer scale can compensate for higher noise levels and lead to a more reliable assessment of scholarly activity and impact.

For the above reasons, usage data has generated considerable interest in the past ten years, cf. the success of the COUNTER project. The potential of usage data is clearly significant, but to arrive at systems of usage-based scholarly assessment a number of challenges must be addressed:

The MESUR project seeks to address the above mentioned challenges by a research program that is focused on exploring the viability of usage- and network-based metrics of impact from large-scale, aggregated, and representative usage data.

The MESUR project started in 2006 at the Digital Library Research and Prototyping Team at the Los Alamos National Laboratory’s Research Library with a grant from the Andrew W. Mellon Foundation. Under the direction of the Principal Investigator Johan Bollen and co-Principal Investigator Herbert Van de Sompel, it started an ambitious research program that proceeded along the following three lines:

The MESUR project executed this research program with support from the Andrew W. Mellon Foundation from 2006 through 2008. In 2009 the PI moved to the School of Informatics and Computing at Indiana University, where the project continued, supported by a grant from the National Science Foundation. In 2010 the Andrew W. Mellon Foundation granted an award for maintaining the activities of the MESUR project and to support a planning process aimed at investigation models to evolve the project to an open, community-supported, sustainable framework.

MESUR began collecting its usage data in 2006 by negotiating data sharing agreements with a large variety of institutions that provide access to scholarly resources. To assure coverage of various types of usage the project took care to include as many different types of data providers as possible. MESUR’s usage data providers therefore include some of the world’s most important publishers, aggregators, and institutional consortia. In the period 2006 through 2008, MESUR achieved data sharing agreements with the following providers: BioMed Central, Blackwell Publishing, the California Digital Library, California State University, EBSCO, Elsevier (Scopus and ScienceDirect), Emerald, Ingenta, JSTOR, Mimas-zetoc, Thomson-Reuters (Web of Science), and the University of Texas.

The usage data that was provided to the MESUR project was recorded in a variety of data formats, but was required to at least contain the following data fields and be recorded at the article-level:

All usage data was shared under agreements that contained strong guarantees of user, institutional, and provider privacy.

At the end of 2008 the MESUR project had collected more than one billion usage events (individual user requests) pertaining to nearly 50 million documents and about 100,000 serials (of which most are not scholarly journals). This usage data was recorded in the period 2002 to 2007.

All data arrived in the native format in which it was recorded by the usage data provider. After transferring usage data to the MESUR servers, it was extensively processed and normalized. Document identifiers were deduplicated to merge usage from different providers that pertained to the same document.

The MESUR usage data contains extensive information on the nature and context of individual usage events. In particular, the session identifier identifies sequences of user requests that occurred within the same user session. This allows the reconstruction of user clickstreams — i.e., the sequence of how a user moves from one article (and journal) to the next in a session.

To investigate the structural properties of usage data one can combine these clickstreams to calculate the overall probability that users who visit one article will move on to another particular article. When calculated for all pairs of articles (and journals) a map of science results that shows the prevailing paths that users follow in their online activities as they move from one article (and journal) to the next. A sample of this map is shown in Fig. 1. Each circle represents a journal which is colored according to its domain classification given by the Getty Institute’s Arts and Architecture Thesaurus. Pairs of journals are connected by a thin line if there exists a high probability that users will move from one journal to the next in their online clickstreams. (See Fig. 1 below.) 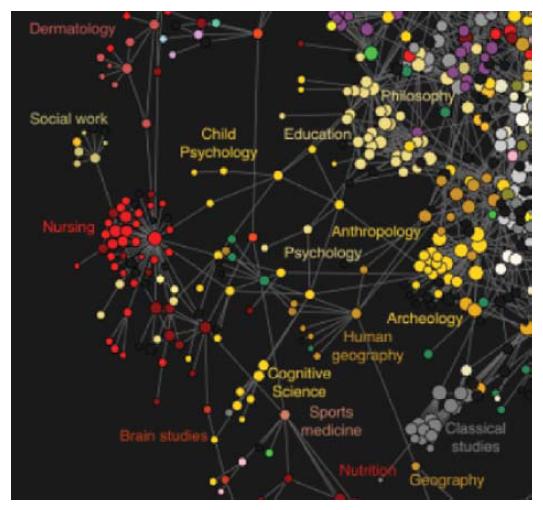 More details on the MESUR map of science can be found in Bollen (2009a).

After calculating a usage-based network for nearly 100,000 serials (about 30,000 of which are actual scholarly journals) of which the network shown in Fig. 1 is but a small sample, the MESUR project retrieved and defined a myriad of metrics that exploit the structure of this network to assess various facets of the value of particular journals. For example, some journals in the mentioned map of science are not highly used but form crucial connectors between otherwise separated domains.

A variety of network metrics can thus be calculated from the network of usage-based journal connections such that each embodies a different facet of a journal’s impact. The MESUR project has calculated 39 of these metrics, some from the citation data in the Journal Citation Reports and some from MESUR’s usage data. A comparison of the journal rankings produced by these metrics revealed a number of interesting properties of both existing and proposed metrics and the notion of scholarly impact itself. In fact, by calculating correlation coefficients between each pair of metrics we could visualize the similarities between metrics in a map of metrics that is shown here in Fig. 2. 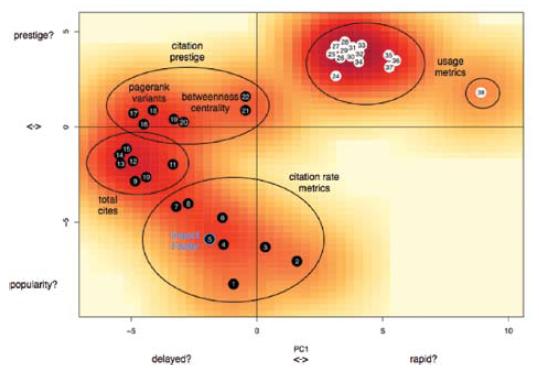 Figure 2. Annotated Map of Metrics as Produced by MESUR: Impact Metrics that Produce Similar Rankings are Positioned in Each Others’ Vicinity. See Bollen (2009) for technical details and metric definitions.

More information on these results can be found in Bollen (2009b).

More information about the MESUR project including access to its maps of science and metrics can be found at the MESUR Website: http://www.mesur.org/.

The MESUR project is currently in its 4th year; over the past four years it has made significant contributions to the community’s thinking on scholarly assessment. In addition, MESUR has pioneered the large-scale aggregation and normalization of usage data, defined minimal formatting and field requirements for articlelevel usage data, defined novel impact metrics, and created large-scale maps of science that can visualize current trends in science. However, in spite of MESUR’s progress and its compelling results more research and development are required to create a reliable and community-accepted system of usagebased scholarly assessments. The logistical requirements of large-scale usage aggregation in particular represent a significant burden. The lack of standards with regard to the recording, sharing, and normalization of usage data, as well the costs of negotiating tailored data agreements with a large number of usage data providers, needs to be addressed to secure the sustainability of the project in the future. This has become particularly pertinent as the MESUR project has accumulated a unique collection of data and results that represent a unique value to the scholarly community. The Andrew W. Mellon Foundation has for these reasons granted an award to the MESUR project in 2010 to conduct a planning process to investigate how the MESUR project could evolve to a more open, sustainable, and community- supported initiative.

Loet Leydesdorff (2007). Betweenness centrality as an indicator of the interdisciplinarity of scientific journals. Journal of the American Society for Information Science and Technology, 58(9), 1303—1319.

Marko. A. Rodrguez, Johan Bollen and Herbert Van de Sompel. A Practical Ontology for the Large-Scale Modeling of Scholarly Artifacts and their Usage. In Proceedings of the Joint Conference on Digital Libraries, Vancouver, June 2007.

Exact Editions Aggregates Articles on Climate Change for Free Resource According to Information Today "In collaboration with more than 50 of its publisher partners, Exact Editions introduced a freely accessible Climate Crisis resource page that features nearly...

ATG Book of the Week: The Filing Cabinet: A Vertical History of Information